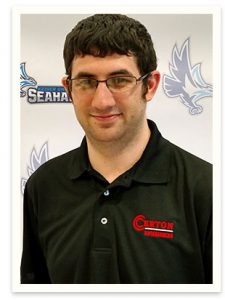 Vincent D’Abbene recently graduated as the valedictorian from the Melbourne campus of Keiser University with his Bachelor of Science degree in Software Engineering. The question could be raised about how a self-proclaimed average student in high school was able to go on to achieve such academic success in college. Grit and determination, plain and simple. After high school he’d opted not to go right to college and after a few years, knew he needed to focus on his future. A big influence on his choice to go into his chosen field was his high school computer science teacher who created a spark for programming that he’d later pursue when he enrolled at Keiser University. As he progressed through the program earning A’s, he chose to challenge himself to continue earning high marks simply to prove to himself that he could.

Vincent now has a successful career with Certon as a software engineer; a job he was offered after the first interview. A significant lesson he learned while earning his degree carries over into his beloved career, “There is infinitely more to this field than I could learn in a lifetime. The best path to take is to dive in headlong and learn as much as I can, as I go.”

When asked what advice this 27 year old would impart to others interested in entering this field, he shared to those interested in programming they should understand they are, in essence, learning a new language that wasn’t designed for communication between humans. As with anything in life he has learned the only way to learn is to keep practicing and he encourages others to keep at it and not give up.